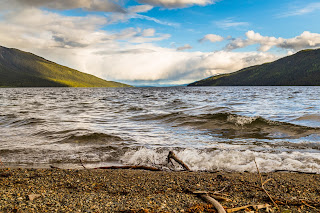 Here's a little tale about a night of camping on our recent trip to the Yukon Territory.

We traveled part of the Canol Road, which is quite a long gravel route that takes you through some very beautiful scenery and by some gorgeous lakes.  We decided to camp for a night at Quiet Lake. 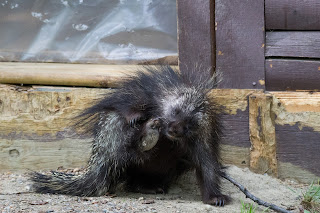 Having a good scratch.

We pulled into the campground up in front of the cooking shelter.  A good sized porcupine was standing there having a chew on the wood.  We watched him for a few minutes, before he noticed us.  He had a good scratch the ambled off.

Our tent was damp from the rain the night before when we stayed at Boya Lake in Northern BC, and the campground was empty, so we decided to set our tent up inside the cook shelter so that it could dry out.

Not long after we settled down for the night, we heard a porcupine grumbling vocally as he made his way along.  He commenced to begin chewing loudly on the shelters wall quite near our tent.  Not long after that, another porcupine came along and took up chewing on the other side of the shelter.  The sound of their chewing was very loud and echoed throughout the building.

We lay there laughing and listening to it for a while, but eventually wanted some sleep.  Our "Ok! That's enough!'s" "Knock it offs" and shouts didn't faze these ravenous dudes.  Neither did the banging on the floor.  A few seconds pause, then 'Crunch, crunch, crunch". 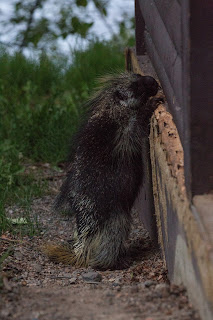 Eventually, the sound of crunching wood turned to that of teeth on metal, so I grabbed my camera and got up to make sure the stinkers weren't going to town on the vehicle.  Porcupine have been known to have a taste for wires, and tires.  The metal chewer took off when I exited the building.  I went around the shelter and peeked around the corner.  The wood chewer was still chowing down on building.  Eventually he noticed me and came to check me out.  When he got fairly close to me, he snapped his teeth at me.  Most likely disgruntled by having his meal interrupted. 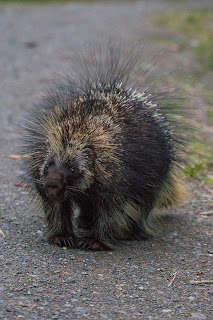 Looks at me and chomps his teeth.

I start backing up as he decides to make his grumpy exit. 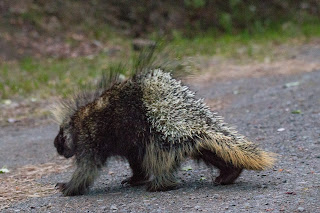 So while I'm giving Wood Chewer some space, I hear a noise behind me, and down comes Metal Muncher. 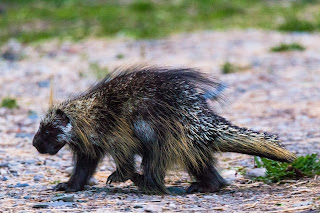 Hmmm....  wonder if there's anything left to eat?

He pauses a moment, and we look at each other.  Then he continued on and down the other side of the bank to the lake, as if that were his plan in the first place. 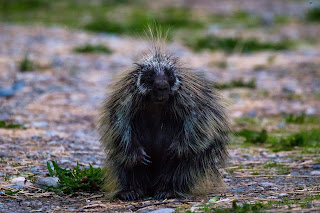 At this point, I'm ready for a nice hot cup of coffee. 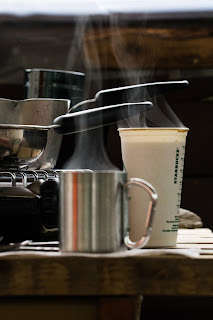 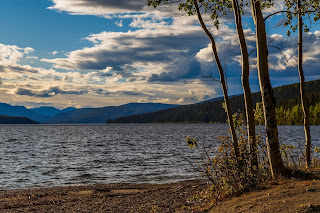 So after losing my photos on my blog, I was very discouraged and basically just quit posting.   I've decided to delete the posts with the missing photo and start a new.

I'll be posting recent adventures, and past ones as well.

I have recently returned from a camping trip up into Northern BC and the Yukon Territory.  Absolutely stunning country!

Thanks for taking the time to check out my little blog! 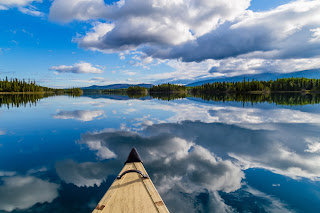 A new addition to our Adventures!   A canoe!
Posted by Jen at 10:05 No comments:

So after losing my photos on my blog, I was very discouraged and basically just quit posting.   I've decided to delete the posts with the missing photo and start a new.

I'll be posting recent adventures, and past ones as well.

I have recently returned from a camping trip up into Northern BC and the Yukon Territory.  Absolutely stunning country!

Thanks for taking the time to check out my little blog!

A new addition to our Adventures!   A canoe!
Posted by Jen at 10:05 No comments:

A Poem for the Northwest 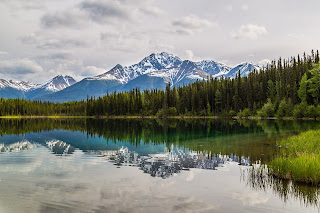 Why I love the Northwest

With mountains all blanketed asleep in the snow
They shine in the moonlight with a cold, icy glow
In the spring they wake with a rumbling grumble
And send snow sheets down, in a billowing tumble

With trees so gigantic, majestic and tall,
They line emerald rivers and provide shelter for all
From swirling damp mist the spirit bear is there
And disappears silently, a glimpse of the rare

The sound of the birds so lovely and sweet
The smell of raspberries, delectable treat
With fiddle heads, mushrooms, berries galore
wonderful treats to enjoy from the land I adore

From mountains so tall, to valleys so low
I am struck by their beauty where ever I go
With lakes, rivers, and forests we are so blessed
There's no other place I'd rather be than the Northwest!

All the photo's have disappeared.

It seems that all my photo's have disappeared off of my blogs.  This is very unfortunate, as this particular blog is based on photo's from my hikes.  It will be some time before I am able to find and replace all the photos.  There are lots, and it will take time.  I'm sorry for the inconvenience.
Posted by Jen at 17:40 No comments:

Last year, I started writing my blog, Klew Nu Farms.  It was something I really enjoyed doing.  Writing about a few things and posting pictures.  Well, this fall, things happened and I am no longer living at Klew Nu Farms and I was rather lost at what to do about that blog since I no longer have a farm.

A few of the things I really love doing is going out on hikes whenever I can get out, and taking pictures.  I'm not a professional hiker or photographer.  Just a girl who likes to take walks in my trusty boots and bring along my camera whenever I can get out.  Looking though pictures, got me thinking that most of the pictures I have taken in the past few years, I've taken while wearing my Bogs.  So it got me thinking,  why not write about some adventures that I've taken in my boots?  This provides me with an excuse to get out hiking, take pictures, perhaps spending time with good people doing something I enjoy and gives me an opportunity to share it.  I live in Northern British Columbia, and there are so many beautiful things to see here.

I hope to share some older adventures, as well as many new ones.
Posted by Jen at 08:43 1 comment: